This news brought to you by: INTER PRESS SERVICE
By Jan Lundius | 12.May.22 | Facebook Twitter
War and Famines â Warnings of Potential Outcomes of the War in Ukraine

STOCKHOLM, May 12 2022 (IPS) - An entirely unnecessary and all too tangible nightmare continues to scourge Ukraine. Without doubt, one catastrophe after another still awaits. Much of Ukraineâs harvest, of paramount importance to global food supply, is at risk of being lost due to Vladimir Putinâs and the Russian armyâs belligerent actions. Last year, Ukraine harvested a record of 106 million tonnes of grain â 25, or even 50 percent of this amount is currently feared to be lost during this year while most experts add that âthis is an optimistic forecast.â 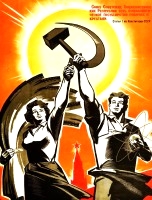 This would not be the first time Ukraine, The Worldâs Breadbasket, suffers from grain shortages and the threat of famine. Considering the current war it might be reminded that famines are âman-made disastersâ, equivalent to the Chinese term renhuo, which in January 1962 during a âcadre-meetingâ was used by The Communist Party of Chinaâs Vice Chairman, Liu Shaoqi, to describe the disastrous results of Chinaâs Great Leap Forward, which planning and execution he had participated in. Between 1958 and 1962, in a misapplied effort to increase industrial and agricultural production, the Chinese Government became responsible for working, beating and above all starving forty-five million Chinese people to death.

Several years ago, a good friend of mine, Hussein Rahman, told me it is not accurate to blame mass starvation on poor harvests. Hussein is quite knowledgeable. He was awarded his Ph.D. from the Dijon University after researching a high yielding variety of rice. Afterwards he worked for 15 years for the World Food Programme (WFP) and was then posted in Lesotho, Angola, Comoro Islands, Ethiopia, and Yemen. During his last years with the UN, Hussein was during ongoing wars active in Somalia and Iraq, working for The Food and Agriculture Organization of the United Nations (FAO). Hussein was convinced that famines are a political issue. There are no examples of mass starvation affecting democratic societies.

While studying at Dijon University, Hussein was inspired by Amartya Senâs book Poverty and Famines, in which Sen analysed what he as a nine-year-old boy in 1943 had seen in Bengal â how people succumbing to acute starvation lay dead in the streets. More than three million individuals died from this devastating famine.

Amartya Sen proves that despite crop failures, there was in 1943 an adequate food supply in Bengal, though extensive rice export, panic purchase, hoarding, military food storage and an economic boom caused food prices to rise and it was mainly landless rural workers and the urban proletariat, whose wages had not followed the development, who were unable to obtain enough food. Bengali food production was admittedly lower than it had been the previous year, though more abundant than it had been in the years before that, when no famine had occurred.

Later studies of the Bengal famine have proven Sen right in his conclusion that famines are created by humans and accordingly can be prevented, or at least mitigated. Archival studies have evidenced that Winston Churchillâs war cabinet in remote London had been repeatedly warned that a famine was brewing in India. At an early stage, the British Government was well aware of the fact that an excessive export of rice was likely to lead to a lethal famine, but it nevertheless chose to continue exporting undiminished quantities of rice from its Indian colonies to other parts of the Empire.

London turned a deaf ear when Indians demanded a promised million tonnes of wheat in return for the exported rice. The warlords stood leaning over their maps and with a cigar in his mouth Churchill observed that the reason for the famine was actually that Indians bred like rabbits and jokingly wondered if the rice shortage was so immense â how come that Gandhi was still alive? The War was at the centre of these menâs concerns and in order to prevent the Japanese enemy, who was approaching Bengal from Burma, from obtaining necessary food supplies, huge quantities of rice were brought away from the border areas, while thousands of boats were confiscated.

At the thought of Churchill and his associates leaning over their maps predicting and planning how the War would unfold, Requiem, a poem by Anna Akhmatova comes to mind. Akhmatova, was born in Ukrainian Odessa and had during World War II survived the German siege and starvation of Leningrad, her two husbands had been executed by the Soviet regime and her only son spent more than ten years in Stalinâs Gulag camps. In her poem Akhmatova writes about the immense suffering behind figures, abstract data, figures and statistics. One of the Requiemâs stanzas reads:

I would like to call you all by name,
but the list has been removed
and thereâs nowhere else to look.
I have woven you a shroud,
from poor words I overheard.
I will remember you, everywhere.
I will not forget you,
not even among new sorrows.

The chilly attention rulers show to maps and statistics, or during gatherings around computers, does seldom acknowledge the immense human suffering caused by their fateful decisions.

According to Amartya Sen it is the inability of those in power, or even worse â their reluctance to act in the public interest by guaranteeing freedom for food producers, which cause mass starvation. Amartya Sen writes about an urgent need for a ânew human psychologyâ, by taking into account how

Fatal hunger is among the most degrading suffering affecting any human being. Paralysing starvation does not lead to rebellion. People plagued by an all-consuming hunger are forced into an animalistic, instinctive, all-encompassing quest for survival. During a famine, people experience months of indescribable suffering, weakened by hunger pangs that might lead to insanity, paralysis, and eventually death. Due to food shortage, entire social systems break down through a lack of morals, âdecencyâ, and compassion. Crime, violence, and emotional insensitivity spread throughout the social body, becoming replaced by a ruthless struggle of all against all. A desperate battle for your own survival.

Inside the Gulag and the killing fields of the Stalin era, as well as in the Nazi death camps and German occupied territories, starvation reigned, paired with freezing cold, mistreatment and general vulnerability. Even if not every hunger victim passed through the torment of famish and mistreatment, as if they had become animals, they all suffered from hopelessness, which in addition to physical pain forced them into shame and despair. It is not without reason that cynical rulers might consider hunger to be an effective means of crushing their enemies, bringing reluctant subordinates to their knees by pacifying and paralysing them through hunger and despair. Hunger is a weapon for the powerful and a bottomless shame for the destitute.

In 1928, the Stalinist regime introduced its first Five Year Plan, intended to force peasants to become workers mobilized for massive industrial production, or becoming engaged in a âmore efficient, modern agricultureâ in the form of kolkhozy (if they were cooperative-run collectives) or sovkhozy (if they were state-run), while people branded as âreactionaries, saboteurs and spiesâ were purged, exterminated and/or ârendered harmless.â The same thing which happened in China twenty years later.

The estimated figure for Ukrainian deaths during the Holodomor (1932-1933) is 3.3 million, while at the same time 67,297 individuals died of starvation in the labour camps and 241,355 in the settlements to which peoples reluctant to join collectives had been deported together with their families. Thousands died during travels to destinations in distant Siberia, or Kazakhstan.

When we hear about the famines and wars that continue to harass a great part of the worldâs population, let us not forget that they are renhuo, man-made. Behind the statistics are suffering individuals â men, women and children â while the guilty ones, leaders watching computers and calculating gains and losses while replacing people with figures, are quite easy to identify and hold accountable for their pernicious actions.