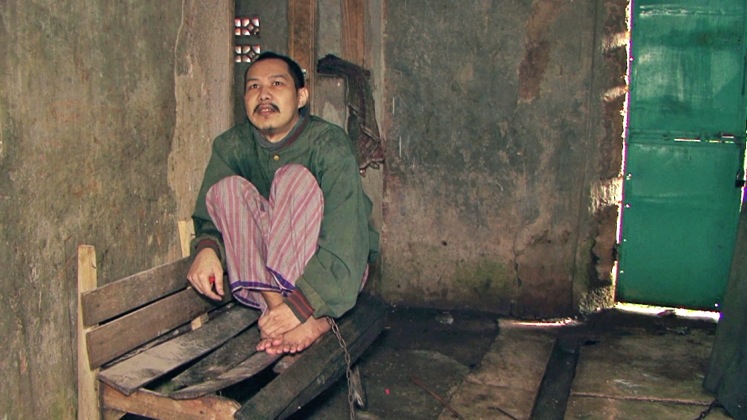 Breaking the Chains| 1hr : 03mins
Director: Erminia Colucci | Producer: Erminia Colucci
Focus Years: 2015 | Country: United Kingdom
Subject Tags: belief, europe, health, human rights, indonesia, oppression, poverty, psychology, united kingdom
Quality Tags: Optimistic, Slow, Activating, Harmonizing
Synopsis:
Breaking the Chains highlights the unflinching efforts of a local Indonesian organisation fighting a battle for human rights. In Indonesia, as in other countries worldwide, individuals coping with mental health issues are often chained, caged, locked away and held in isolation. In Bahasa Indonesia, both the chains and the practice of binding those with mental illness are called pasung. Members of Komunitas Sehat Jiwah (KSJ) are determined to combat the use of pasung and seek to bring health support and freedom to mental health patients in the remote areas of Cianjur, West Java. KSJ works together with local doctors, health care services, families, communities and former pasung victims to guide communities towards effective and humane treatment. The KSJ volunteers often traverse dangerous roads and walk for hours into the jungle to access isolated families; they are committed to building new approaches to mental health and to eradicating pasung one patient at a time. Breaking the Chains captures both the unfailing commitment of KSJ and the untold stories of pasung victims like Yahah, a young woman who has been chained inside a small room for 17 years. Simultaneously heart wrenching and inspiring, the film is the first documentary to focus on this almost universally ignored violation of human rights. The filmmaker received exclusive access to stories that have not previously been represented by the international media. These stories have significance beyond Indonesia, as other low-income countries such as Somalia, Afghanistan and Cambodia chain and cage mental health patients. In featuring the activism efforts in Indonesia to stop pasung, this documentary aims to encourage action in other countries where similar practices continue to be prevalent. For more information, visit: http://movie-ment.org/breakingthechains/
Breaking the Chains | 1hr : 03mins