The Human Consciousness Now...Our World in the Midst of Becoming...to What? Observe, contemplate Now.

The Stream
Activate
Earth Rise
Slavery
Now Running:
Annexation of a Stateâs Territory is a Violation of the Charter & International Law, Warns UN Chief
By Guterres

Remarks to the Press by the Secretary-General of the United Nations on Russiaâs decision to annex Ukrainian territory. Credit: UN Photo/Manuel ElÃ­as

Remarks to the Press by the Secretary-General of the United Nations on Russiaâs decision to annex Ukrainian territory. Credit: UN Photo/Manuel ElÃ­as

UNITED NATIONS, Sep 30 2022 (IPS) - The Kremlin has announced that a ceremony will take place Friday in Moscow that will launch a process of annexation of the Ukrainian regions of Donetsk, Luhansk, Kherson and Zaporizhzhia.

In this moment of peril, I must underscore my duty as Secretary-General to uphold the Charter of the United Nations.

The UN Charter is clear.

Any annexation of a Stateâs territory by another State resulting from the threat or use of force is a violation of the Principles of the UN Charter and international law.

In its landmark Friendly Relations Declaration of 24 October 1970 ârepeatedly cited as stating rules of general international law by the International Court of Justice â the General Assembly declared that âthe territory of a State shall not be the object of acquisition by another State resulting from the threat or use of forceâ and that âno territorial acquisition resulting from the threat or use of force shall be recognized as legalâ.

And I must be clear.

The Russian Federation, as one of the five permanent members of the Security Council, shares a particular responsibility to respect the Charter.

Any decision to proceed with the annexation of Donetsk, Luhansk, Kherson and Zaporizhzhia regions of Ukraine would have no legal value and deserves to be condemned.

(Read)NEWS BROUGHT TO YOU BY: INTER PRESS SERVICE
INTER PRESS SERVICE
The TV programs are brought to you by Al JAZEERA...
Measuring Human Rights – PODCAST
Welcome to Strive podcast, where we chat with new voices about fresh ideas to create a more just and sustainable world. My name is Marty Logan. Before we get to todayâs episode, if you enjoy Strive I encourage you to share it with a friend so they can check out the show. If youâre listening […]
Korean Slums: The Shadows of Society, or the New Light for the Future?
Have you watched Parasite? In 2021, everyone seemed to be watching it. But I wonder how many of them paid attention to the old man who found a little shelter in a hidden basement behind the kitchen of a mansion. However hidden it was, that’s where he could meet his basic needs. That was his […]
Reasonable Left, Irresponsible Right: & the Future of Social Democracy
With no shortage of catastrophes in the past 15 years worldwide â the democratic left is stepping up to provide stability amid the storm. Throughout the history of mankind, there have been catastrophes. In modern times, there have also been media representations of catastrophe, including worked-up or even imagined catastrophes. More than 60 years ago, […]
Deadly Smoke: Feeding Children Kills Cafeteria Staff
During my summer break this year, I read a news article about five school cafeteria workers who had died of lung cancer. Due to these incidents, a union of cafeteria workers, wearing their aprons and holding their lunch trays, held a protest in front of the Presidentâs office on a scorching summer day. And it […]
Aged Persons Haunted by Abuse in Zimbabwe
At his house in Mabvuku, a high-density suburb in Harare, the Zimbabwean capital, 86-year-old Tinago Murape claims his grandchildren starve him. Not only that, but Murape, who now walks with the support of a walking stick, said his three grandchildren â grown-up men with their wives and children living in his house, accuse him of […]
A University for the Kurds of Syria
There is a main hall as well as workshops, laboratories and, of course, a cafeteria, where the half-hour break flies by amid card games and laughs. It could well be any university if it wasn’t for those men armed with assault rifles at the entrance. This is the campus of University of Rojava in Qamishli […]
From Indonesia to India: Is There Hope for Anti-Corruption Efforts Within the G20?
As global crises mount, the G20 is proving unable to find solutions. Political disagreements within the bloc- including most prominently with Russia over the ongoing war in Ukraine- have hamstrung collective efforts. Economic challenges have inevitably led to a focus on domestic priorities. And significant political changes in key G20 countries over the past few […]
We Must Ensure That Climate Funding Reaches the Guardians of the Forests
US $270 million may sound like a lot of money, especially for just one year. But it is only a small fractionâless than one percentâof all global funding for climate change adaptation and mitigation.Â  This small fraction, however, is the annual amount that was invested in the tenure and forest management of Indigenous Peoples and […]
Womenâs Financial Inclusion, Empowerment in Kenya
A two-year-old child cries hysterically as his mother attends to customers standing in front of her stall to buy vegetables on the outskirts of the Kenyan capital Nairobi. The mother, 25-year-old Esther, who refuses to give her surname for fear her husband will know that she has spoken to strangers about family issues, sells spinach, […]
UNâs High-Level Meeting of World Leaders Falls Short of Gender Empowerment
By Thalif Deen 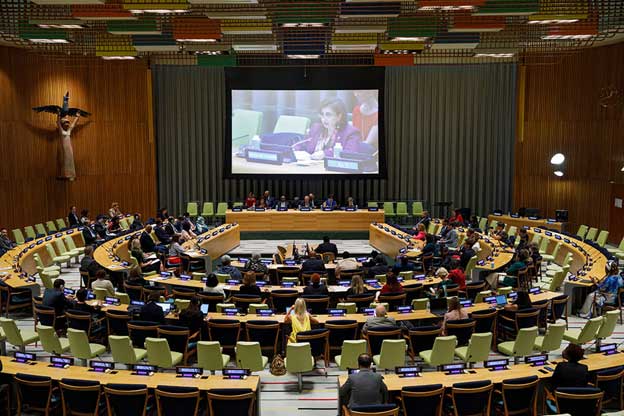 Among the 190 speakers, there were only 23 women, âa figure that represents around 10 per cent of leaders who participated this yearâ, according to the UN.

The President of the General Assembly Csaba KÅrÃ¶si of Hungary struck a note of political consolation when he said: âBut though their numbers are small, women leaders âpack a punchâ, to quote former New Zealand Prime Minister Helen Clark, who moderated this yearâs first General Assembly Platform of Women Leadersâ.

But the reaction from rights activists and civil society organizations (CSOs) was mostly negative.

Antonia Kirkland, Global Lead on Legal Equality at Equality Now told IPS âthe dismal number of women leaders speaking at UNGA this year is very worrying given the regression on women’s rights in many parts of the world, including in the United States, where the UN General Assembly meetsâ.

There is a well-documented correlation, she said, between peace and security generally, economic development and women’s rights, which has an impact on everyone.

“The low number of female leaders speaking at UNGA is less than half the already low number of women parliamentarians worldwide (just over 26% according to IPU).â

âAnd as it becomes harder and harder for civil society to access the United Nations, women’s rights organizations have less of an opportunity to hold governments accountable to their legal obligations and commitments to ensure gender equality,” Kirkland declared.

(Read)NEWS BROUGHT TO YOU BY: INTER PRESS SERVICE
What Stray Dogs Need in Thailand: Family and Love
By Junwoo Na and Jeeyoon Na 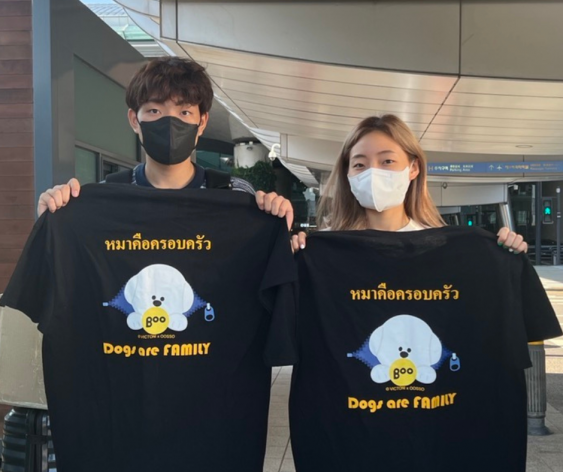 Junwoo Na and Jeeyoon Na campaign to save street dogs.

Junwoo Na and Jeeyoon Na campaign to save street dogs.

Bangkok & California, Sep 30 2022 (IPS) - When I started living in Thailand, I noticed something peculiar that I had never seen in other countries I had visited before. It was the stray dogs. I ran into so many stray dogs when jogging on the streets.

At first, I was scared of them because they might attack me, as I had read in news articles. Surprisingly, most of these stray dogs in Thailand seemed friendly. Unfortunately, since they slept on dirty streets and drank sewage water, they contracted various diseases such as rabies, babesiosis, inflammation of the lungs, canine monocytic ehrlichiosis, etc.

Woods, a little Bichon FrisÃ©, is looked after at home, but stray dogs in Thailand live tough lives.

As a pet owner, I felt they were not supposed to be on the streets. Imagine, my Woods, a little Bichon FrisÃ©, out on dirty streets bitten by ticks and getting rabies! It just breaks my heart. Every time I look at the stray dogs in Thailand, they look like my Woods. And I wondered, âWhere do these stray dogs come from? And why do Thai people leave them on the streets?â Then I had a big awakening and decided I needed to help these stray dogs. This is how I began my public campaign and fundraising for stray dogs. 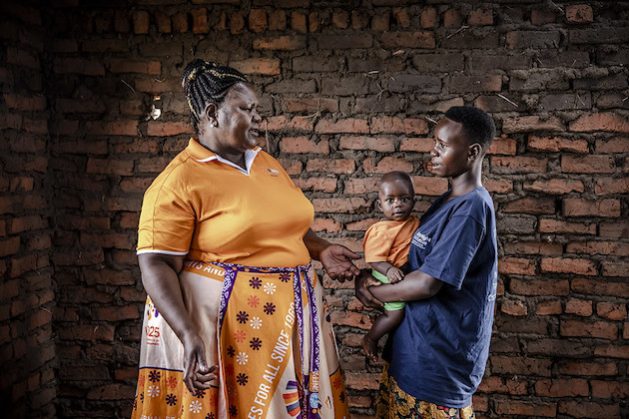 Ricksani Alice, 19, who was married at a young age but is now back in school hoping to complete her education thanks to the Spotlight Initiative talks with UNFPA Gender Programme Officer Beatrice Kumwenda at Tilimbike Safe Community Space in Chiludzi village, Dowa, Malawi on November 2, 2020. Credit: UNFPA ESARO

Ricksani Alice, 19, who was married at a young age but is now back in school hoping to complete her education thanks to the Spotlight Initiative talks with UNFPA Gender Programme Officer Beatrice Kumwenda at Tilimbike Safe Community Space in Chiludzi village, Dowa, Malawi on November 2, 2020. Credit: UNFPA ESARO

Johannesburg, Sep 29 2022 (IPS) - Child marriage continues to be a scourge in many African countries â despite legislation and efforts of many, including parliamentarians, to keep girls in school and create brighter futures for them. This was the view of participants in a recent webinar held under the auspices of the African Parliamentary Forum on Population and Development (FPA) and UNFPA East and Southern Africa Regional Office (ESARO).

The webinar, supported by the Asian Population and Development Association (APDA) and the Japan Trust Fund, heard how progressive legislation prohibiting marriage for adolescents under 18, and in one case, 21, was not enough to stop the practice.

Dr Kiyoko Ikegami, Executive Director, and Secretary General, APDA, noted in her opening address that the COVID-19 pandemic had affected child marriage prevention programmes and increased poverty and inequality, which was a driving force in child marriages.

Chinwe Ogbonna, UNFPA ESARO Regional Director a.i, said while there had been considerable achievements since the 1994 ICPD conference in Egypt â the work was not yet done.

âI run a homestay for guests visiting our village, I also grow green vegetables and do beekeeping,â said Moktan. âHowever, our biggest source of family income is alaichi (large cardamom, in the Nepali language).â

(Read)NEWS BROUGHT TO YOU BY: IPS
Climate Action Plans Could Help Address Injustice, Inequity in African Cities
By Gina Ziervogel

The FRACTAL project (Future Resilience for African Cities and Lands) engaged a trans-disciplinary group of researchers, officials and practitioners that worked across six cities in southern Africa between 2015 and 2021.Voices of the marginalized and at-risk people are crucial for generating appropriate locally owned solutions.

The FRACTAL project (Future Resilience for African Cities and Lands) engaged a trans-disciplinary group of researchers, officials and practitioners that worked across six cities in southern Africa between 2015 and 2021.Voices of the marginalized and at-risk people are crucial for generating appropriate locally owned solutions.

In its summary for policymakers, the report states: âInclusive governance that prioritizes equity and justice in adaptation planning and implementation leads to more effective and sustainable adaptation outcomes (high confidence).â This is a welcome, albeit long overdue development.

(Read)NEWS BROUGHT TO YOU BY: IPS
Hard Hit By Climate Change, Villagers Raise a Forest on Their Own
By Umar Manzoor Shah 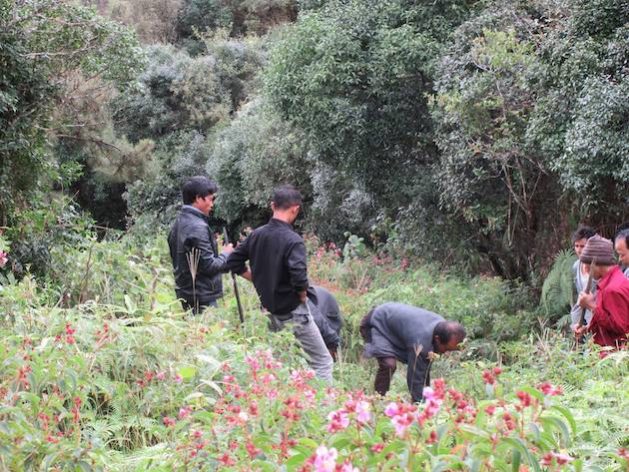 The villagers work in a forest they planted to save themselves from the ravages of climate change. Credit: Umar Manzoor Shah/IPS

The villagers work in a forest they planted to save themselves from the ravages of climate change. Credit: Umar Manzoor Shah/IPS

Meghalaya, India, Sep 28 2022 (IPS) - Some ten years ago, Sheemanto Chatri, a 39-year-old farmer hailing from India’s northeastern state of Meghalaya, was reeling with distress. The unseasonal rainfall had washed away all the crops he had cultivated after year-long labor in his far-off hamlet.

In 2013, this farmer had sowed a ginger crop on his half-acre land and was hoping for a profitable yield. However, providence had willed otherwise. In September that year, unseasonal rains wreaked havoc on Sheemantoâs village, destroying his crops beyond repair.

(Read)NEWS BROUGHT TO YOU BY: IPS
Load more...