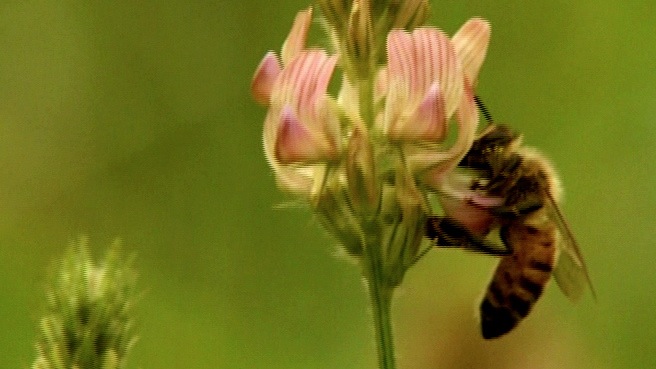 Bees Extinction, Solving the Mystery| 51mins
Director: Natacha Calestreme | Producer: Thierry Berrod
Focus Years: 2008 | Country: France
Subject Tags: ecology, environment, global, science
Quality Tags: Optimistic, Slow, Activating, Harmonizing
Synopsis:
An acute analysis of an international alarming phenomenon, this gripping film is conceived like a police investigation, aiming at unfolding a criminal mystery. Here, the inquiry is about the bees that are vanishing from the face of the planet. It is a spreading disaster, first spotted November 2006 in the U.S.A., Germany, Switzerland, Italy, Belgium, Spain, Portugal, Poland, United Kingdom and France. Losses sometimes reach 90 percent of a beehive population. In a world where a 153 billion dollars share of agriculture depends on bees to pollinate, the food industry is starting to worry. From witness to witness, viewers collect and assemble the first pieces of information. Every scenario is examined in an attempt at understanding the phenomenon. Is it the Varroa (an acarid), the Nosema (a fungus), a virus, the pesticides, the impoverishment of the floral areas, the beekeeper's methods, magnetic waves? As the investigation continues, renowned scientists from all around the world (U.S.A., Switzerland, France and Germany) are invited to answer these questions and clarify this obscure situation. Throughout the film, the secrecy surrounding this phenomenon slowly becomes clearer, as viewers are careening from one fascinating and frightening discovery to another. Even the often quoted "multifactorial factor" hides a gruesome revelation: mankind is fully responsible for bees' extinction, pathologies are just consequences. Our environmental conditions are mass-murdering the bees. As a conclusion, the film highlights how little beehive citizens have become sentinels of our health, and how much we need to worry about our home planet.
Bees Extinction, Solving the Mystery | 51mins