This news brought to you by: INTER PRESS SERVICE
By Umar Manzoor Shah | 18.Jan.23 | Twitter
How Innovative Farming Rescues Crises-Stricken Farmers in This Indian Village 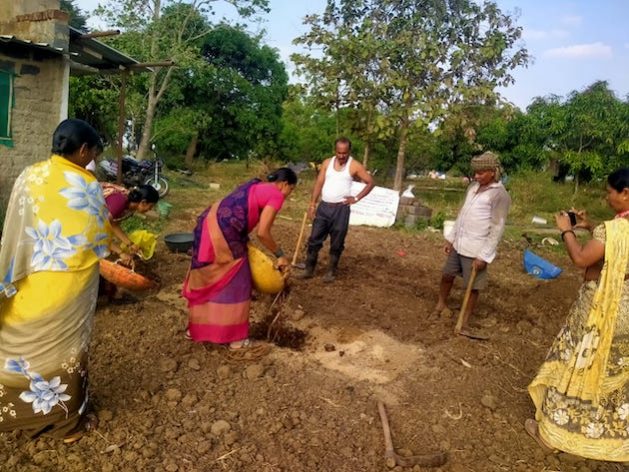 Farmers inthe southern state of Karnataka, India,Â during training sessions for multi-cropfarming. The techniques have meant survival in the face of uncertain weathercaused by climate change. Credit: Umar Manzoor Shah/IPS

Farmers inthe southern state of Karnataka, India,Â during training sessions for multi-cropfarming. The techniques have meant survival in the face of uncertain weathercaused by climate change. Credit: Umar Manzoor Shah/IPS

KARNATAKA, INDIA , Jan 19 2023 (IPS) - The South Indian State of Karnataka has been reeling for the past three yearsâthe late arrival of monsoons, the surging temperatures, and drastic changes in the weather patterns are putting the stateâs farmers in dire straits.

As per the government reports, climate change is affecting Karnatakaâs water cycle and rainfall patterns, resulting in heavy rainfall and flooding in some areas and drought in others. Extreme weather events have been more frequent and intense in Karnataka over the past few years. The average annual rainfall in the state is 1,153 mm, with 74 percent falling during the Southwest monsoon, 16 percent during the Northeast monsoon, and 10 per cent during the pre-monsoon.

Between 2001 and 2020, the state was hit by a 15-year drought of variable intensity. Some areas have been drought-stricken for more than five years in a row. In addition to 2005, 2009, 2018, 2019, 2020, and 2021, Karnataka witnessed severe floods in 2005, 2009, 2018, 2019, 2020, and 2021. Flooding and landslides have been a problem for the fourth year since 2018. Flooding and landslides have become the new normal during the monsoon seasons in the southwest and northeast, which were previously the most vulnerable to drought, reflecting the impact of shifting climatological circumstances.

Farmers are concerned about the looming climate change menace.

A year ago, Kondaji Reddy deemed farming an âabsolutely unfitâ profession for survival.

âFor months together, I toiled hard in the field growing sugar cane and rice. However, the late arrival of monsoons devastated everything. The hard work didnât yield any outcome, and my family was on the verge of starvation,â Kondaji told IPS.

He added that for months together, his family survived on the little savings it had made over the years.

âThen I thought I should quit farming forever and go to the city and work as a laborer. At least my family wouldnât starve,â lamented the farmer.

Another farmer, M. Rachappa, shared a similar predicament. He says he extensively used chemical fertilizers, hoping to improve his harvest.

âHowever, things didnât turn out the way I had hoped. The land turned barrenâ¦ The crops I had sowed for months were destroyed. All I could stare at was the dead leaves and the barren soil,â says Rachappa.

The farmer adds that he was on the brink of selling his ancestral landâspread across three acresâand buying some grocery stores in the town. âI had lost all hope in farming. I had cultivated a firm belief in my mind that farming would no longer provide me with a decent living. But at the same time, I was ridiculing myself for planning to sell the land where my forefathers have toiled for decades together.â

To end the crisis, the farmers of this small hamlet recently developed a unique strategy. They are adopting techniques that could help them deal with the climate change crises.

Multi-cropping is one method that these otherwise crisis-stricken farmers are now relying upon. It is a common land management method that aims to increase agricultural production while diversifying the crop mix for economic and environmental reasons. It lowers the cost of inputs, irrigation, and labor, among other things.

Umesh Kalolli, a farmer leading the practice and imparting the training of this technique to other farmers in the village, says he got to know about this farming method from a research institute.

âI was uncertain about my future due to frequent losses. I was about to shun farming forever, but a friend of mine encouraged me to seek help from the experts. He took me to an agricultural university, where I shared my predicament with the researchers. For about three weeks, I was trained for multi-crop farming. Upon my return to my village, I began encouraging other farmers to use this farming method,â Kalolli said.

He adds that besides multi-cropping, the farmers were encouraged to do away with using chemical fertilizers. Instead, they are asked to adopt an organic farming method that not only makes the produce profitable but also of high quality.

âThere is a dire need to revolutionize farming practices with a natural system. This is going to be the greatest service for humankind. We need to focus on marginal and downtrodden farmers so that they can be empowered, and this way, we are going to build a prosperous world for ourselves and our future generations,â Kalolli added.

Rachappa, the farmer, says that soon after acquiring the training, he began adopting theÂ multi-crop method on his land. He began cultivating various vegetables, fruits, sugarcane, and rice paddies at the same time. This, he says, not only saved him time, but it also didnât need extensive irrigation facilities.

âI then subtly moved to the organic method of farming. I stopped the use of chemical fertilizers in the field. I got the cow dung from the livestock I had in my home. Today, I earn more than fifty thousand rupees (700 US dollars) every month. I did not even think once about selling off my land. I am content with the profit it is producing for me now,â M. Rachappa said.

âMy fellow farmers even helped me dig the pit in the backyard for the manure to decompose. It is a natural fertilizer. The vegetables I produce now require the least amount of water, so the late arrival of monsoons no longer bothers me. My produce is sold at higher prices because it is organic,â Reddy says with a smile.