This news brought to you by: INTER PRESS SERVICE
By Pauline Muchina and Emira Woods | 19.Jan.23 | Twitter
The People of Africa Need Relief: the Biden Administration can Provide it 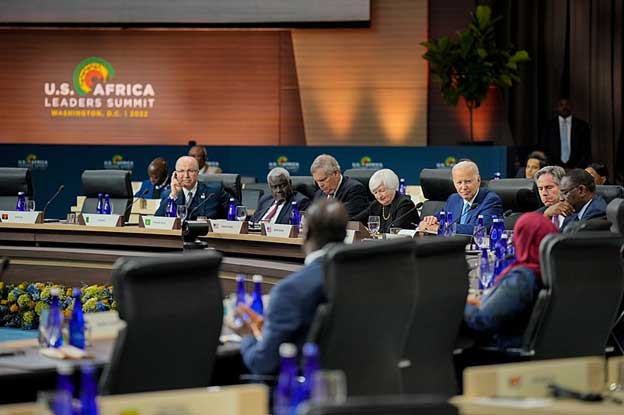 NAIROBI, Kenya, Jan 19 2023 (IPS) - United States Treasury Secretary Janet Yellen is traveling to South Africa, Zambia, and Senegal this week in the hopes of strengthening U.S.-Africa relations at a time of waning U.S. influence on the continent â the first in a series of Biden administration trips announced at last monthâs U.S.-Africa Leaders Summit.

As African women leaders working for peace and climate justice, we welcome this renewed engagement with a region that is too often sidelined. But meetings and photo-ops are not enough.

If the United States wants the trust of the African people, we need more than words. We need tangible action to materially improve the lives of communities across the continent.

There are two steps the Biden administration could take today to do just that: supporting a new issuance of Special Drawing Rights (SDRs) for cost-free, debt-free crisis relief, and providing additional financial support for the Loss and Damage Fund agreed to at COP27, the most recent UN Climate Conference.

Three years since the COVID-19 outbreak, under one-third of Africans have received a single vaccination dose. Economic growth in Africa slowed âsharplyâ in 2022, due to a worldwide economic slump, inflation, and an ongoing series of shocks.

The World Bank is warning of a âsharp, long-lasting slowdownâ in 2023 that will âhit developing countries hard.â One-fifth of Africaâs population faces chronic hungerâdouble the world averageâand the climate crisis is only deepening these stark statistics.

For perspective: Driven by climate and conflict, half of Somalia’s population faces acute food insecurity. Trekking for weeks to refugee camps for food, many Somalis are forced to bury starved loved ones in shallow graves.

Against such challenges, the 2021 issuance of $650 billion in SDRs by the International Monetary Fund provided a lifeline for millions of Africans. SDRs are a reserve asset that can be issued in times of crisis at no cost to the U.S. or any other country. Developing countries can then use these SDRs to pay debts, stabilize currencies, or fund critical purchases like vaccines and food supplies.

Since the 2021 issuance, over 100 low- and middle-income countries have used their SDRs for often life-saving care for their citizens. African countries used SDRs more than any other region, with 47 of 54 African nations using some or all of their allocation.

Though last yearâs SDR issuance was impactful, it was not enough. Thatâs why African leaders like African Union Chair Macky Sall and finance ministers across the continent are calling for a new SDR issuance of at least the same size.

The UN Global Crisis Response Group on Food, Energy, and Finance; dozens of US lawmakers; the International Chamber of Commerce; and nearly 150 civil society organizations worldwide also support the proposal.

Additionally, African countries must be compensated for the harms caused by a climate crisis for which they bear little responsibility. Despite having contributed the least of any continent to greenhouse gas emissions, Africa remains the most vulnerable to climate change.

Nineteen million Africans have been affected by extreme weather events in 2022 alone, and cyclones and droughts wrought havoc on infrastructure, agriculture, and domestic economies.

In the words of the Pan-African Climate Justice Alliance, âyou cannot set fire on someoneâs house and sell them the fire extinguisher, or worse still, loan them money to rebuild it.â The Loss and Damage Fund will provide climate reparations through financial support to nations most vulnerable to climate shocks.

The Fundâs impact, however, will only be as strong as the worldâs commitment. While nations like Germany and Belgium have made symbolic pledges to the fund, current contributions fail to address the existential magnitude of the crisis. Increased U.S. financial backing will pave the way for additional support from other high-income countries.

Naysayers may balk at the cost of these proposals, or suggest they do not align with U.S. national interests. However, a new SDR issuance, while costing nothing to U.S. taxpayers, would foster global economicâand therefore politicalâstability, while proving U.S. responsiveness to African needs.

Following the passage of the highest-ever Pentagon budget, the Biden Administration should recall their own analysis that climate change exacerbates global security challenges.

Instead of paying massive sums for weapons of war, often in the name of debunked strategies to counter terrorism, the U.S. should invest in measures that address the root causes of violent conflict in places like Somalia and the Sahel.

During last monthâs U.S.-Africa Leaders Summit, 60 organizations, including Partners In Health, Africans Rising, and Friends of the Earth US, called on President Biden to support these two urgent proposals. At the time, he failed to do so.

As Secretary Yellen travels to our continent, the administration has another opportunity to move beyond rhetoric and toward action to improve the lives of Africaâs 1.2 billion people.

Supporting a new SDR issuance and contributing funding for the Loss and Damage Fund would go a long way toward salving the ever-present economic wounds of colonialism, addressing the climate crisis, and bolstering opportunities for Africans to chart their own course in the 21st century and beyond.

Pauline Muchina comes from the Rift Valley in Kenya, where her family still resides. She is the Policy, Education and Advocacy Coordinator for Africa for the American Friends Service Committee in Washington, DC, and the Chair of the COVID-19 Working Group of the Advocacy Network for Africa.

Emira Woods, originally from Liberia, is the Executive Director of Green Leadership Trust and an ambassador for Africans Rising for Justice, Peace, and Dignity, a network of African social movements on the continent and the diaspora.