This news brought to you by: INTER PRESS SERVICE
By Andrew Lee - Karuta Yamamoto - SooJung Chrystal Cho - Warr | 20.Jun.22 | Facebook Twitter
Plastic Pollution Will Kill All of Us! 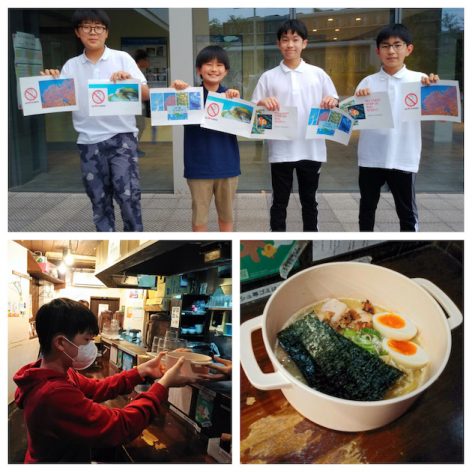 Karuta Yamamoto, Dalton Tokyo Junior High School, Tokyo, Japan: âI try to not to use a (disposable) plastic bowl when I order food such as ramen noodles. I also share information about the harmful effects of plastic with my classmates. Credit: Karuta Yamamoto/IPS

This opinion piece is the second in a series written by learners from middle and high schools in Asia and the USA.

Karuta Yamamoto, Dalton Tokyo Junior High School, Tokyo, Japan: âI try to not to use a (disposable) plastic bowl when I order food such as ramen noodles. I also share information about the harmful effects of plastic with my classmates. Credit: Karuta Yamamoto/IPS

Seoul, Tokyo, Jakarta, Los Angeles, Jun 20 2022 (IPS) - Have you ever watched the movie âFree Willyâ? A young boy, Jesse, had an Orca whale friend named Willy. Jesse freed Willy into the wild ocean believing that it was the best decision to make for his friend. Well, that was a long time ago.

If Free Willy was made in 2022, would we have the same ending?

With over 165 million tonnes of plastic waste found in the ocean these days, it makes us wonder if Willy would truly feel safe in our plastic-filled waters.

Considering that more than 100 million marine animals die every year due to plastic pollution, wouldnât the aquarium be a safer habitat for Willy today?

Letâs explore what causes plastic waste in the ocean, how ocean ecosystems are impacted, and what actions we must take to reduce them to protect marine life and ultimately sustain our worldâs biodiversity.

One day while I was watching TV, I became so disturbed by a campaign that showed images of fish suffering and sea turtles tangled up in plastic bags and fishnets.

About 8 million tonnes of plastic annually end up in the ocean, with about 5 trillion plastic pieces floating in the sea. Itâs no wonder so many sea animals get entangled in them. It restricts their movements which leads to their premature death.

That is why I question if Willy would truly be free in our ocean today.

Furthermore, how do plastics end up there in the first place? Well, ALL of us human beings are the direct cause of it! The plastic trash we nonchalantly throw away flows into the rivers which carry it to the ocean â including discarded nets, lines, ropes, and abandoned boats by fishers.

Which countries are most responsible for it? According to the University of Georgia, countries like China and Indonesia top the list of countries causing plastic pollution, blocking the global sea.

However, we all know Willy is not the only marine animal affected by the plastic waste in the ocean â all marine life and ecosystems are affected by it, which directly affects our biodiversity negatively.

Why should we care? Because it affects ALL of humanity! We, too, are affected.

According to the International Union for Conservation of Nature, 12-14,000 tons of microplastics are ingested by North Pacific fish yearly because a lot of them mistake plastics for food.

These are the same fish that we humans consume! According to LuÃ­s Gabriel A Barboza and others, in the journal Science Direct, 49% of the fish they analyzed had microplastics inside the gastrointestinal tract, gills, and dorsal muscle.

Considering we are at the top of the food web for seafood, we eat an estimated 842 microplastic items per year from fish consumption. Thatâs horrific!

According to a study by Joana Correia Prata and others, microplastics may disrupt immune function and cause neurotoxicity in humans.

So, in short, we end up eating the plastic trash we throw in the ocean, from which we will inevitably get sick.

Just think about it: we eat over 40 pounds of plastic (18 kilograms) in our lifetime. Thatâs the size of a large bag of dog food! Even worse, that plastic might even contain harmful toxins!

Now, how does that make you feel?

Similarly, marine animals also get hurt by plastic litter. According to EcoWatch, one in three marine animal species get entangled in the trash.

Isnât it sad that 86% of innocent sea turtles get suffocated, drowned, or entangled in plastic?

What about microplastics? When marine animals ingest plastic, they can die of starvation because their stomachs are filled with plastic debris and often cut by plastic and suffer internal injuries.

If we donât stop the accumulation of plastic waste in the ocean, what will become of our marine animals and us?

According to Condor Ferries, by 2050, fish will be outnumbered by our dumped plastic. If you were to go snorkeling by then expecting to see beautiful sea life, youâd be shocked to discover dirty plastic swimming around you in its place.

Under these circumstances, how does plastic waste impact ocean water? According to Okunola A Alabi and others, plastics in the oceans do not degrade completely. During the plastic degradation process, toxic chemicals like polystyrene and BPA can be released into the water, causing water pollution.

In addition to water pollution, plastic waste also threatens marine animal habitats. The harsh conditions and constant motion in the ocean break down plastic into particles of less than 5mm in diameter, called microplastics which are dispersed even farther and deeper into the sea, where it contaminates more habitats.

If Jesse were to free Willy into the ocean now, how would Willy feel when he ingests microplastics with every breath he takes? Something needs to be done for other animals like Willy. What action can we take to solve this problem?

Well, we donât need to be great to do something grand.

Even a tiny seed of an idea can lead to a thoughtful solution.

Let us share what we do to reduce plastic waste in our daily lives.

As middle school students, we bring our reusable bottles to school and drink from the water fountain.

We use shampoo bars instead of shampoo from a plastic bottle.

Andrew Lee, Seoul Korea: Demonstrating how harmful liquid shampoos and soaps can be. This is in addition to the plastics used for their containers. Using natural soaps is environmentally friendly. Credit: Andrew Lee/IPS

In addition, instead of using plastic bags for our groceries, we carry our reusable shopping bags.

We also carry our slogans to public places such as schools and grocery stores as our campaign to educate people about reducing plastic waste and protecting ocean animals and the environment (See pictures 1~4).

These may be small actions, but they actively help reduce plastic waste. If you join us in our zero-waste lifestyle, we can make our community practice zero waste.

This type of chain reaction is not a far-fetched idea. We can make this happen!!

Warren Oh, Seoul Foreign School: âI created these slogans to use when participating in the Adidas Run for the Oceans: Help End Plastic Waste Challenge 2022. Locally, I support zero waste in my community, encourage recycling and continue to shop with Eco-Bags in Seoul.â Credit: Warren Oh/IPS

One small step is all it takes to start changing INACTION into ACTION! Many parts of the world already practice zero waste, such as Japan, Costa Rica, Dominica, and Guatemala, where over 80 percent of their waste is reused and recycled.

It is our duty as global citizens to keep marine animals and their habitats safe from our plastic wastes. Aquatic animals do so much for us.

Not only do they provide us with food to eat, but they are a part of vital ecosystems on which our worldâs biodiversity depends.

So, exercise your power by doing your part to keep the ocean clean and safe for them.

Those who are able and willing to practice the zero-waste movement â COME, I ask you to join us in our action!

Use your creative minds to envision a plastic-free ocean. Marine animals like Willy will never be free unless we, as citizens of the world, take action to clean up our trash in the sea.

For the love of marine life, as Mother Teresa said, letâs do small things with great love. How would YOU like to start contributing? Our oceans need to thrive for ALL of us to survive!

Andrew Lee, Karuta Yamamoto, SooJung (Chrystal) Cho, and Warren Oh are middle school learners living in the USA and Asia. They participated in a joint APDA and IPS training on developing opinion content.Â Hanna Yoon led the course and edited the opinion content.Â