This news brought to you by: INTER PRESS SERVICE
By Emilio Godoy | 2.Aug.22 | Facebook Twitter
Doubts Raised Over Conditions of Mexicoâs Mangroves 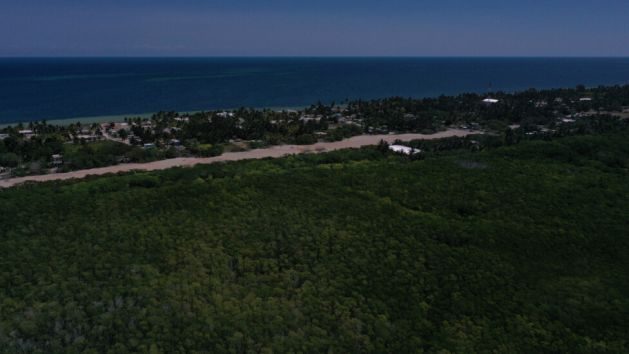 Aerial view of San Crisanto and its preserved mangrove, in the state of Yucatan, in southeastern Mexico. In addition to trapping and storing CO2, mangroves control coastal erosion, protect against hurricanes and clean water. However, in Yucatan, as in other similar ecosystems, they face threats from increasing urbanization, mass tourism and the effects of the climate crisis. Credit: Juan Pablo Ampudia / IPS

Aerial view of San Crisanto and its preserved mangrove, in the state of Yucatan, in southeastern Mexico. In addition to trapping and storing CO2, mangroves control coastal erosion, protect against hurricanes and clean water. However, in Yucatan, as in other similar ecosystems, they face threats from increasing urbanization, mass tourism and the effects of the climate crisis. Credit: Juan Pablo Ampudia / IPS

SINANCHÃ, Mexico, Aug 2 2022 (IPS) - Two extremes of coastal development can be found side-by-side in the small community of San Crisanto, in the municipality of SinanchÃ© in Mexicoâs southeastern YucatÃ¡n state.

On one side is the mangrove forest that the community has conserved since 1995. It protects the settlement from coastal erosion, supports local fisheries and provides jobs in ecotourism. And, as of 2022, it is generating income from carbon credits.

On the other side, two large housing developments are taking shape. Such building work in the coastal zone is one of the biggest threats to mangrove ecosystems in Mexico and worldwide. But in San Crisanto, the forest is safe â for now.

âFortunately, the mangroves are well,â says to IPS JosÃ© Loria, president of the community-based San Crisanto Foundation, which oversees efforts to protect and restore them. âWeâre working. Thanks to this, there is a better perspective regarding their environmental services.â

But elsewhere in Mexico threats to mangroves are rising. Meanwhile, uncertainty surrounds government-funded efforts to restore the coastal forests, and it is unclear whether the mangroves can cope with rising sea levels the global warming is creating. 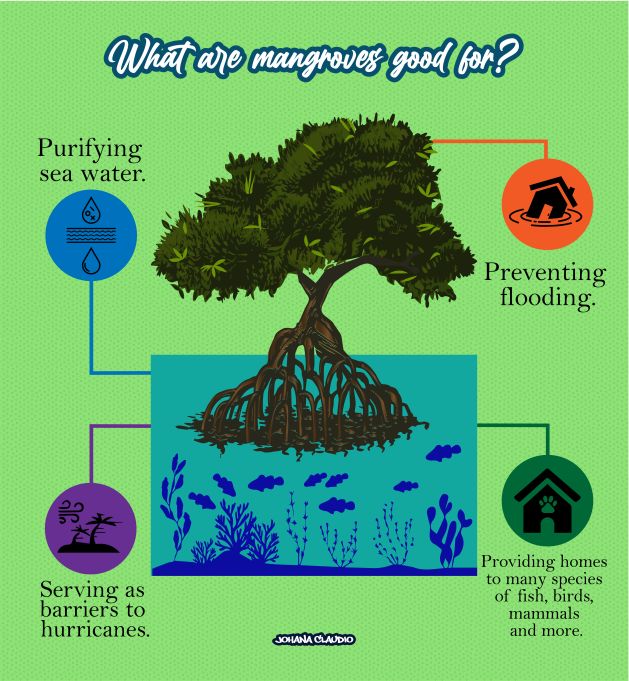 Only three countries â Indonesia, Australia and Brazil â have a greater area of mangroves than Mexico, which had 905 086 hectares of these forests in 2020.

These fragile ecosystems have a dual role to play in the fight against the climate crisis. On one hand, they absorb and store vast amounts of carbon. On the other, they protect coastlines from storms and rising seas.

But they are under threat from the construction of aquaculture farms, infrastructure, and tourist development. Regulations intended to protect mangroves and wetlands havenât stopped their devastation.

Mangrove deforestation affects three states in particular, according to Mexicoâs Mangrove Monitoring System. In the northern territory of Sinaloa, it totaled 5 258 hectares between 2015 and 2020, in Baja California Sur it amounted to 1 068 and in the northern state of Nayarit, 247 hectares.

As well as deforestation, large areas of mangroves are being degraded by human activities. While the total area of degraded mangroves fell from 18 332 hectares in 2015 to 9 680 hectares in 2020, it increased in the states of Baja California Sur and Chiapas, in the south.

Replanting lost mangrove forests is one of the aims of the UN Decade on Ecosystem Restoration 2021-2030, which was launched in 2019, but so far no mangrove restoration projects in Mexico have been registered on the UNâs database.

But many mangrove restoration projects are in fact taking place. Between 2006 and 2020, for example, Mexicoâs National Forestry Commission (Conafor) approved 74 mangrove planting projects to compensate for deforestation elsewhere. These projects took place in 13 states, covered 11 479 hectares and cost 200 million dollars, according to Conafor data. Nayarit state has hosted 21 initiatives and the southeastern state of Veracruz, 18.

In addition to these deforestation-compensation projects, Conafor funded 11 mangrove restoration initiatives in 2021. Together, they planted 1,34 million mangrove seeds on 1 048 hectares, and cost 2,52 million dollars.

Mangrove logging in Puerto Morelos, in the southeastern state of Quintana Roo, in the YucatÃ¡n Peninsula, a forbidden activity by the environmental laws. In Mexico, mangroves face threats from urbanization, tourism development and the installation of aquaculture farms. Credit: Emilio Godoy / IPS

Claudia Teutli, a mangrove researcher at the Center for Research and Advanced Studies of the state-run National Polytechnic Institute, critiques some aspects of policies towards mangroves.

âWe donât know the success of the projects, due to how the restoration has been done,â she told IPS. âIt has been done mostly for offsets requirements [for environmental damage]. There wasnât a goal of recovering the ecosystem.â

Teutli says the governmentâs monitoring system is out of date, and that restoration requires better strategies and knowledge of restoration sites.

âThere is a confusion between restoration and reforestation,â she says. âWe donât know what was done and how. Success is more than the number of planted trees.â

Joanna Acosta, a professor of conservation biology at the state-run Autonomous University of Carmen in the southeastern state of Campeche, agrees.

âWe donât know where restoration has worked or where it has failed,â she says. âThe governmental cartography doesnât clarify if the mangroves are restored or not. We have to introduce transparency strategies, because there shouldn’t be intervention in areas already under restoration.â

The scale of the challenge is huge â Acosta estimates that Mexico has at least 235 000 hectares of mangroves that are not covered by conservation or management programs. She says that acknowledgement of the value of mangroves should work in favor of the design of public policies.

âMangroves are the most resilient to the climate crisis, thatâs why they should be protected,â she says. âItâs important to protect them due to their capacity for capturing and storing carbon, and because their degradation releases carbon dioxide.â

Inside San Crisantoâs large coastal mangrove swamp, in the southeastern state of YucatÃ¡n, which survives thanks to the local communityâs efforts. Mexican policies for mangrove protection havenât yielded clear results, as there is a lack of follow-up for monitoring and evaluation of the governmental support programs. Credit: Emilio Godoy / IPS

The community in San Crisanto is capitalizing on this. It has begun selling carbon offsets based on the carbon its 850 hectares of mangrove forest stores.

San Crisanto is an ejido â an area of land owned by the state but held and managed communally by local people. Its mangroves also generate revenue from Conaforâs Environmental Services Payment Program. This year, the program is paying the ejido 53 dollars for each of 340 hectares of mangroves.

The ejido suggests the creation of a national mangrove network and a national coastal resources system.

âThere should be some work for building the organization,â says Loria. âWe are the starting point for correcting environmental processes and generating resilience.â

But despite San Crisantoâs successes, Loria acknowledges problems such as coastal erosion. This raises the questions of how Mexicoâs mangroves will tolerate rising seas as the planet warms.

Some researchers say rising sea levels will outpace the rate at which mangroves accumulate sediment in the next 30 years if warming continues at its current rate. This would drown the mangroves. Other scientists, working in Mexicoâs YucatÃ¡n Peninsula, say mangrove forests will vary in their ability to cope with rising seas.

Teutli is upbeat, saying that as the sea level rises, mangrove sediments will accumulate, keeping the trees above the water level.

â[Mangroves] are adapting to flooding,â she says. âBefore we thought they didnât tolerate it. Tropicalization is coming and it is going to help the mangroves.â

This article is part of a two-story series that was produced with support from Internewsâ Earth Journalism Network.