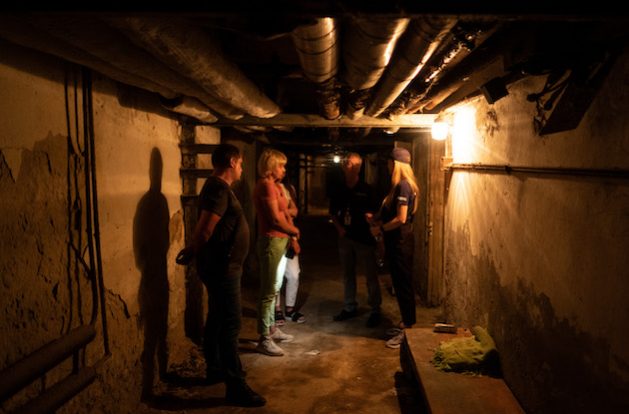 Dr Svetlana Alexandrova, Medical Director of the Chernihiv Psychoneurological Hospital, and Yevgen Skydan, Technical Specialist, walk Todd Bernhardt and his team through the basement where patients and staff were sheltered during the Russian invasion. Credit: International Medical Corps

Dr Svetlana Alexandrova, Medical Director of the Chernihiv Psychoneurological Hospital, and Yevgen Skydan, Technical Specialist, walk Todd Bernhardt and his team through the basement where patients and staff were sheltered during the Russian invasion. Credit: International Medical Corps

On one of his visits, Bernhardt met Dr Svetlana Alexandrova, Medical Director of the Psychoneurological Hospital in Chernihiv, a city about two hours northeast of Kyiv that saw fierce fighting during the early weeks of the invasion.

He said Alexandrova was a defiant and committed leader who was not afraid to confront Russian soldiers and tell them to stop destroying the hospital, which treats critically ill patients. Hospital staff proudly told Bernhardt that as the soldiers were getting ready to retreat, they told the staff members that they had a âtough boss.â

âThe patients in this hospital have developmental, mental health, and physical challenges that have led to them being hospitalized. In some cases, they are quite old and frail. And during this time, they had to shelter in the hospital basementâa damp and dark place where you would not want to live,â Bernhardt said. He described how hundreds of patients with 30-40 staff were trapped in the basement during the Russian bombardment.

They had to stay in this basement for 40 days and 40 nights without access to water, heat, and electricity. The staff occasionally went out and managed to forage for food during lulls in the fighting. In fear of being shot, they would cook over open fires during the day while being undercover.

International Medical Corpsâ mission is primarily to be a first responder. A big part of its approach is to work within an existing health system, support it, and strengthen it. It also provides medicine or medical equipment, trains doctors, staff, and clinicians, and builds water and sanitation systems.

âWe are a first responder. We go in, respond to the disaster, and stay to help strengthen existing systems, to make sure that the community is left stronger than when we first came in,â Bernhardt said, elaborating on International Medical Corpsâ mission.

âWeâre trying to provide services to support the most vulnerable populations who suffer during a conflict. That can be children. That can mean the elderly. That can mean the disabled. It especially, unfortunately, means women and girls. We are working as hard as we can to ensure these vulnerable populations get the services they need. And, of course, weâre doing everything we can to ensure that we prevent that kind of violence from occurring in the first place,â Bernhardt said.

Another organization working within the war zones is the World Food Programme (WFP). It focuses on the broken commercial food supply chains providing food, supporting people with cash so people can make their own choices when buying food, and stabilizing and restoring public and private institutions and services.

In June, they assisted 2.6 million people in Ukraine through food distributions or cash where markets are functioning. Since March, WFP has transferred over 200 million US dollars in cash and cash vouchers to vulnerable Ukrainians. Fifty-five million US dollars of this was provided in July to close to 800,000 people. Internally displaced people receive 75 US dollars per person for up to three people per family.

WFP has also helped more than 115.5 million people in over 120 countries and territories. They were awarded the Nobel Peace Prize for their work in ending hunger.

âAt this time, one in three households in Ukraine is food insecure, and the existing systems in Ukraine that feed tens of millions of people are falling apart. Our goal is to see an end to this conflict. Our job as humanitarians is to feed people and save lives. Weâre willing to stay there as long as itâs needed to support the population and the most vulnerable people in Ukraine,â stated Kyle Wilkinson, Communications Officer for the WFP.

The Ukraine war has internally displaced nearly 6.5 million people, and ShelterBox focuses on projects to meet the needs of internally displaced people. It also has a project that is helping refugees who fled to Moldova, which has received the most refugees per capita of any European country.

ShelterBox has provided hygiene kits to displaced families – mainly women, children, the elderly, and the disabled. During this displacement crisis, it also provides cash to families fleeing Ukraine into Moldova to buy food, prescription medicines, and basic necessities.

ShelterBox has supported tens of thousands of people in Ukraine and hundreds of families in Moldova.

âRapidly launching this response in Ukraine was challenging,â Murray said, noting that securing a supply chain and delivering aid into the country was difficult. âBut we were absolutely committed to helping these families.â

âMore than 700 ICRC staff are working in 10 locations across Ukraine to deliver relief items to people displaced from their homes, providing medicines and supplies to health care facilities, restoring water supply for millions of people, and other lifesaving activities,â Susan Malandrino, Communications Lead at American Red Cross. âFor its part, the American Red Cross has contributed over 50 million US dollars to Ukraine crisis relief efforts and an additional 7.5 million US dollars to partners on the ground to provide meals and medical supplies within Ukraine.â

Malandrino recalls how a colleague on site met two young brothers from Kyiv, 15-year-old Artem and 10-year-old Maksim. When the war started, Artem and Maksim were at a hockey tournament.

They are currently living in one of the Red Cross shelters.

âWhile here, they play hockey to take their minds off the stress of missing family left behind in Ukraine. Artem says he talks to his father and grandmother daily and misses walking his dogs, including his favorite small highland terrier,â Malandrino explained.

The Hungarian Red Cross ensures each room has a small refrigerator, private bathroom, clean and fresh sheets, and provides wholesome meals from its restaurant.

âBecause of Red Cross support, Artem and Maksim have a comfortable place to live and, for a few moments each day, play hockey and just be kids.â