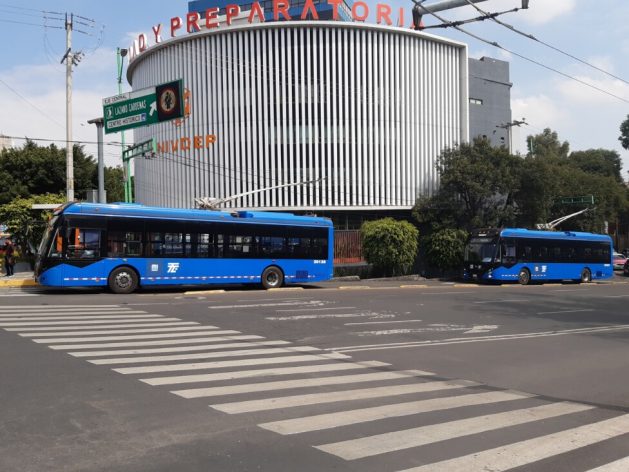 The Mexico City government is increasing the number of electric buses in its fleet, such as the trolleybuses pictured here on a street in the south of the capital. But their energy source is still fossil fuels and the deployment of electric cars remains slow in the country. CREDIT: Emilio Godoy/IPS

The Mexico City government is increasing the number of electric buses in its fleet, such as the trolleybuses pictured here on a street in the south of the capital. But their energy source is still fossil fuels and the deployment of electric cars remains slow in the country. CREDIT: Emilio Godoy/IPS

MEXICO CITY, Sep 19 2022 (IPS) - The Mexico City government began testing an elevated route for electric buses with great fanfare on Sept. 11, in a bid to promote more sustainable transport. The initiative is part of an incipient promotion of electromobility in the country, amidst pro-fossil fuel energy policies.

Mexico, a country of some 129 million people, lacks a national road transport strategy, considered vital for reducing polluting emissions and for the path to a low-carbon economy, which restricts the adoption of policies.

Experts consulted by IPS highlighted the limitations of the measures introduced regarding road transportation.

âThere is a lack of a coherent enabling framework and a national program to promote electric vehicles.â -- Gustavo JimÃ©nez

âElectric mobility is still not very developed, both in terms of facilities for acquiring vehicles and infrastructure. We are not advancing as fast as other Latin American cities. There is a lack of cutting-edge projects,” Bernardo Baranda, director for Latin America of the non-governmental Institute for Transportation and Development Policy, based in Mexico City, told IPS.

Mexico City, home to more than 20 million people when its suburbs are included, seeks to promote electric public transport with the new route for an elevated track exclusively for buses. It is also pushing other initiatives, such as the conversion of buses from diesel to electric, announced in July.

Only two other major cities in the country, the western city of Guadalajara and the northern city of Monterrey, have electric public transportation buses.

In the Latin American region, capitals such as Bogota, Montevideo and Santiago de Chile have large electric public transport fleets and countries such as Chile, Costa Rica, Panama and Uruguay already have sectoral plans in the region.

The Mexican vehicle fleet exceeds 53 million units and has been constantly growing since 2000, according to figures from the National Institute of Geography and Statistics.

Sales of electric and hybrid cars are on the rise: in 2016, dealerships sold 254 electric units, compared to 1,703 in the first half of this year alone.

Self-charging hybrids that do not need to be plugged in (they use their gasoline engines to charge the batteries) have been the most popular, with the number purchased climbing from 7,490 in 2016 to 19,060 in the first half of 2022. Sales of plug-in vehicles grew from 521 to 2,263 in that same period.

Since 2018, the governmentâs Federal Electricity Commission (CFE) has held at least two tenders for the installation of so-called electrolineras, charging stations, in the country, where more than 2,000 points are already operating. But not all of them are working, as IPS found in a tour of several areas of the Mexican capital.

Be that as it may, the government’s plan to deploy this infrastructure has not sufficed to boost the purchase of electric vehicles.

An electric charging point in a neighborhood in south-central Mexico City. The state-owned Federal Electricity Commission has installed more than 2,000 electric vehicle charging centers in Mexico, but this and other measures have not encouraged their spread in the country. CREDIT: Emilio Godoy/IPS

“For the last two years there have been no export and import tariffs for electric vehicles, which reduces the cost by 20 percent. There is also a reduction in value added tax. But progress has not been as fast as we would like. It is complicated to charge your vehicle as you drive around the country,” he told IPS.

The National Electric Mobility Strategy, which the government of President AndrÃ©s Manuel LÃ³pez Obrador froze when he took office in December 2018, created a comprehensive framework and incentive schemes for electric vehicles.

In addition, the current government, described as “pro-fossil fuels” by environmentalists critical of its defense of hydrocarbons, maintains record levels of gasoline subsidies, which will exceed 15 billion dollars in 2022, according to official estimates.

âElectric mobility is still not very developed, both in terms of facilities for acquiring vehicles and infrastructure. We are not advancing as fast as other Latin American cities. There is a lack of cutting-edge projects." -- Bernardo Baranda

Latin Americaâs second-largest economy is the worldâs 12th biggest oil producer and 17th biggest gas producer. In terms of proven crude oil reserves, it ranks 20th and 41st, according to data from the state-owned oil giant PetrÃ³leos Mexicanos (Pemex), in an industry protected by LÃ³pez Obrador despite the countryâs climate commitments.

Among the measures of the stalled Strategy were the installation of charging infrastructure in streets and homes, the introduction of green license plates and the exemption of import and export taxes for electric vehicles.

During the 2nd Annual Meeting of the U.S.-Mexico High Level Economic Dialogue, held in Mexico City on Sept. 12, the United States invited its neighbor and trading partner to participate in an integrated electric vehicle supply chain – an essential link in the economic-environmental program implemented by the U.S. government.

The Economic Commission for Latin America and the Caribbean (ECLAC) lists 10 electromobility projects in the region, one of which involves the manufacture and sale of electric three-wheeled vehicles in Mexico.

Mexico City, Guadalajara and Monterrey, together with three Colombian cities and five Brazilian cities, are also participating in the TUMI E-Bus Mission project, aimed at supporting 500 cities by 2025 in their transition to the deployment of 100,000 electric buses in total.

Funded by German economic cooperation and six international organizations, the project is part of the Transformative Urban Mobility Initiative (TUMI).

The decarbonization of transportation is fundamental to the fight against the global climate crisis. In Mexico, CO2 emissions from that segment totaled 148 million tons in 2019, equivalent to 20 percent of the total, according to the governmentâs National Institute of Ecology and Climate Change (Inecc).

Estimates by the Ministry of the Environment and Natural Resources put life-cycle emissions (from fuel extraction to combustion in the engine) at 358 grams of CO2 per kilometer for gasoline-burning vehicles, 166 for hybrid cars (using fuel and electricity) and 77 for solar energy users.

The study “Estimation of costs and benefits associated with the implementation of mitigation actions to meet the emission reduction targets assumed under the Paris Agreement”, presented on Sept. 13 by Inecc, indicates that six sectoral policies would contribute a mitigation of 36.5 million tons by 2030.

It also outlines 35 emission reduction actions with which the country would obtain total benefits of 295 billion dollars.

In the case of electromobility, the average cost of pollution abatement amounts to 500 dollars per ton, with an investment of nearly 5.9 billion dollars, gross benefits of 3.1 billion dollars and a reduction of 600,000 tons of CO2.

By replacing diesel buses with electric buses, the average cost would add up to 152.90 dollars per ton of CO2. The benefits of fuel savings would amount to 3.2 billion dollars.

By 2030, emissions cuts would contribute one million tons, but this potential would increase as domestic power generation incorporates more clean energy.

The CFE estimates that by 2041 some 700,000 electric vehicles will be in circulation in the country and will require 40,000 charging stations, which also means strengthening the domestic electric power grid.

Last November, during the Glasgow climate summit, Mexico adopted a voluntary goal to sell only non-polluting cars by 2035.

However, at the same time, the Mexican government has provided for the legalization of used cars coming from abroad in 2021, which experts see as a negative step in the fight against pollution.

Baranda the transportation expert said gasoline subsidies, the promotion of fossil fuels and the lack of energy transition are barriers to electromobility.

“You need public policies, at the federal and state level, such as incentives and infrastructure. Many countries are doing this. Mexico is not on the way to making good on international commitments. Itâs a good opportunity to invest in electric transportation,” he said.

For his part, JimÃ©nez questioned the current energy policy, which has an impact on sustainable mobility.

“There are no clear incentives for public transportation, significant subsidies are required. There is not so much infrastructure, there are no regulations for chargers, there are no measures for the circulation of electric cars. There is a lack of a coherent enabling framework and a national program to promote electric vehicles. Mexico has no coordination at the national level,” he complained.