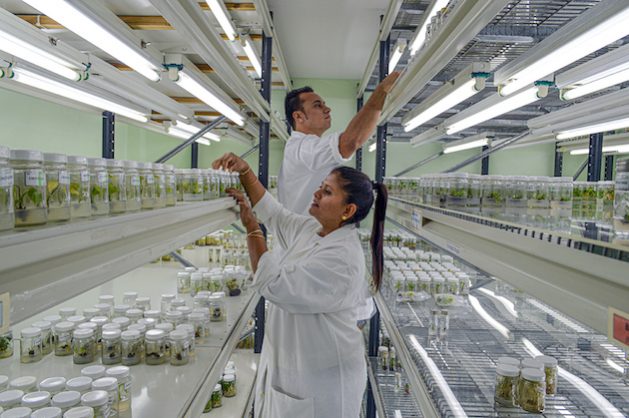 SYDNEY, Sep 22 2022 (IPS) - Safeguarding plentiful, nutritious supplies of food for the present generation of Pacific Islanders and those who come in the future is a frontline goal in the wake of the pandemic and the continual threat of climate extremes to island farming. But the region, where 50 to 70 percent of people depend on agriculture and fisheries for sustenance and income, is now one step ahead in that objective. The regionâs agricultural gene bank, established by the development organisation, Pacific Community (SPC), is now acclaimed as world-class and a leader in building future food supplies.

The Pacific Communityâs Centre for Pacific Crops and Trees manages the major research centre for plant genetic biodiversity and repository of seeds, tissue culture, and DNA. The gene bank, which currently conserves more than 2,000 varieties of trees and crops in the Pacific Islands, was the winner of the Innovative Island Research Award at this yearâs global Island Innovation Awards in April. The new award program was launched last year by former President Bill Clinton and is supported by his New York-based Clinton Global Initiative.

âWe won the award because of our strong research programs and our use of tissue culture to conserve plant genetic material. Through research, we are developing tissue culture as a means to sustainably conserve genetic material in the long term. Through tissue culture, we can also improve mass propagation and multiply genetic resources to meet a high level of demand. Tissue culture is also better for the safe distribution and exchange of plant materials across national borders,â Logotonu Waqainabele, Program Leader for the Pacific Communityâs Genetic Resources in Fiji, told IPS.

The awards aim to reward and raise the profile of individuals and organisations who are leading positive change in peopleâs lives in island nations and communities around the world. They are also part of the Clinton Foundationâs mission to mobilise innovative and effective solutions to some of the most urgent challenges facing the world. This year, the twenty judges included Anote Tong, former President of the Republic of Kiribati, and James Michel, former President of the Republic of the Seychelles, along with Peter Thompson, the United Nations Secretary Generalâs Special Envoy for the Ocean, and Maria Concepcion, Program Manager for Oxfam America.

Karen Mapusua, Director of the Pacific Communityâs Land Resources Division in Fiji, believes the accolade will also bring greater certainty to the future of its work. âI think one of the important benefits will be funding and the sustainability of operations for the gene bank. To move to an increasingly sustainable funding model, we need more investment. And increased awareness of what we can provide, so that people know what we hold in the Pacific, the material, and its availability, for the world to see as well,â she told IPS.

âThe broadening of our partnership base and attracting of other partners who are willing to support our programs, research and distribution will help us to achieve full food security, added Waqainebele.

The gene bankâs services are global: it supplies tissue culture, seeds, and planting materials to countries in all regions. These include all 22 Pacific Island states, but also African nations, including Ghana, Nigeria and Burkina Faso, the Caribbean and, in the Asian region, the Philippines, India and Indonesia, among others.

This year, the Pacific Community opened two new facilities to support its international distribution. A molecular laboratory, which provides pathogen testing of genetic material to international standards, and a quarantine greenhouse, which will be a reception centre for new plant imports.

Pacific Communityâs Centre for Pacific Crops and Trees gene bank supplies tissue culture, seeds, and planting materials to countries in all regions, including 22 Pacific Island states, several African nations, the Caribbean, and, in the Asian region, the Philippines, India, and Indonesia, among others. Credit: Pacific Community

âA key role of the gene bank is to provide material that is safe and clean. Our molecular laboratory screens gene material, so that it is safe to send to other countries without diseases,â Mapusua explained.

The importance of SPCâs work in genetic resources cannot be overestimated. There is no food without seeds. And, looking to the future, âcrop improvement and the delivery of high-quality seeds and planting materials of selected varieties to growers is necessary for ensuring improved crop production and meeting growing environmental challenges,â reports the United Nations Food and Agriculture Organization (FAO).

âWe also receive [from the gene bank] new varieties with higher yielding potential and better adaptability, pest, and climate tolerance. These are important food crops for food security,â he added.

Now, as the Pacific Islands strive to overcome the economic and social impacts of the pandemic, the reliable provision of seeds for food growing is even more critical. Unemployment and inflation have risen, incomes plummeted, and food supply networks widely disrupted. A World Bank survey in Papua New Guinea in 2020 found that about 25 percent of people who were employed before the onset of the virus had lost their jobs, and 28 percent of households had reduced their food consumption. In the Solomon Islands, the survey revealed that 60 percent of households with children under 5 years had cut back on their intake of essential foods.

In response, many Pacific Island governments have placed a high priority on encouraging the growing of food staples by families. For instance, in Tuvalu, workshops were organised by the government to train youths in agriculture, such as taro planting, and Fijiâs Ministry of Agriculture launched a program to provide seedlings direct to households.

âIt is critical to provide the planting materials for recovery. Itâs very important for maintaining food security in the region,â Mapusua told IPS. âIt was very difficult during the pandemic as we had to fly these planting materials to different countries, but we were still able to sustain the collection and deliver these materials to countries.â

But, even before COVID-19 emerged, island nations were confronting numerous threats to agricultural productivity, such as high exposure to extreme climate, natural disasters, pests and diseases and a trend toward greater consumption of imported processed foods. According to the latest findings of the United Nations Intergovernmental Panel on Climate Change (IPCC), Pacific Island nations are among the âmost vulnerable and exposed to climate change impacts,â which include more frequent and extreme tropical cyclones, heatwaves and droughts, increasing water and food insecurity and the loss of marine and terrestrial biodiversity.

To address all these challenges, the Pacific Community has a long-term vision and action plan which starts with investing in plant research and crop development for the century ahead. âOur role is conservation for the future, but also the development of new varieties. For the future, climate change, food security and nutrition are the biggest issues. So, we have a big focus on conserving our plant diversity to help us develop new varieties which have a high climate resilience,â Waqainabele emphasised.