This news brought to you by: INTER PRESS SERVICE
By Paul Virgo | 22.Sep.22 | Facebook Twitter
Civil Disobedience â How to Make Enemies and Influence People 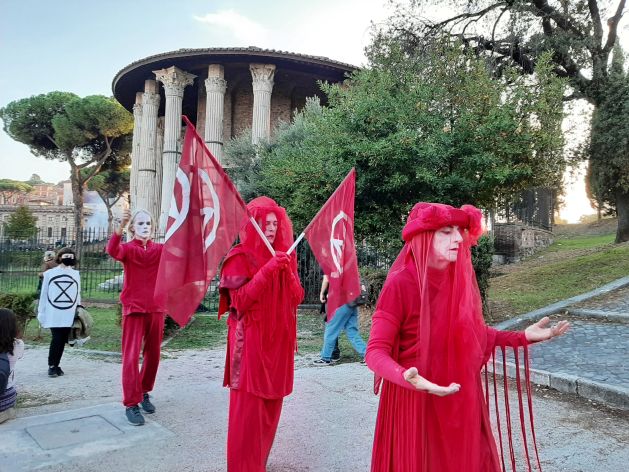 ROME, Sep 22 2022 (IPS) - Blocking metros and highways in rush-hour traffic to stop commuters getting to work. Vandalizing petrol pumps to put them out of use.
Halting sporting events such as the French Open and the British Grand Prix.Â Disrupting bemused art lovers by gluing oneself to priceless masterpieces.

The methods used by the radical climate groups that have sprouted up in many countries in recent years, such as Extinction Rebellion, Just Stop Oil (JSO) and Insulate Britain, seem better suited to alienating people than bringing them on board efforts to stop the looming environmental catastrophe.Â And alienate people they have.

We don't want to make people feel guilty for driving a car or not doing much to have a lighter carbon footprint. But we do want them to remember that they're citizens and members of aÂ community

So they have rights, as we live in a democracy, but they also have duties

The reaction to a series of road-block protests in Rome in June by Italyâs Ultima Generazione (UG – Last Generation) group is a good example. Videos released by the group have you on the edge of your seat in fear for the protestors.Â In one, a car drives so close to a young woman sitting in the road that she appears to go under the vehicle.

In another, motorists violently drag protestors from the highway, with a young male protestor getting pulled away by his pony tail.
The online abuse is high voltage too, with group members getting called everything, from spoilt brats to terrorists.

Many commentators cannot understand why the protests hit ordinary people going about the business, rather than the rich and powerful. Other actions, such protestors gluing themselves to Sandro Botticelli’s Primavera at the Uffizi’s gallery or throwing paint over the Ecological Transition Ministry, have generated bafflement too.

The actions have not just come under fire from people unaware of the scale of the environmental crisis.

Even Adrian Ramsay, the co-leader of the Green Party in England and Wales, told The i newspaper that âwe donât always agree with their tacticsâ when asked about Insulate Britain blocking motorways.

But, with the effects of the climate emergency increasingly manifest, these groups are not worried about being unpopular, as long as their message is heard.

âThe main aim of our protests is to break the wall of indifference and polarize people,â Beatrice Costantino, a qualified vet who quit her career to dedicate herself full-time to fighting the climate emergency with UG, told IPS.

âWe cannot have a constant, deep discussion on climate and ecological emergency without touching people’s emotions. We don’t want to make people feel guilty for driving a car or not doing much to have a lighter carbon footprint. âBut we do want them to remember that they’re citizens and members of aÂ community.

âSo they have rights, as we live in a democracy, but they also have duties. We cannot offload our social responsibilities anymore and we must accept that our inaction is the biggest part of the problem. We cannot ask the government to change if we don’t put enough pressure on it and we are not willing to lose our privileges, our goods and our liberty for the (common) good and the truthâ.

The group that led that way in adopting non-violent civil disobedience to demand climate action was Extinction Rebellion in the UK in 2018. UG and JSO are among several younger, even more radical groups that are part of the international A22 network.
Stop Old Growth in Canada, Derniere Renovation in France and Declare Emergency in the United States are other members.

They are inspired by examples of the successful use of civil resistance in the past, such as with the Suffragettes and the civil rights movement in the United States.

They believe that small groups of determined people can garner the active support of a relatively small proportion of the population, perhaps as low as 1% or 2%, to reach a sort of social tipping point that generates rapid change.

âWe’re confident that this is the number of people that we really need for a non-violent revolution, as it has happened like this most of the time in the past,â Costantino said.

âWhen people are constantly bombed by news about climate crisis and people struggling against it, they start looking for more information, discussing it with friends and family, reflecting within themselvesâ.

She says the actions of the A22 network have produced results already.

âIn Canada in 2021 more than 1,000 people protested against the destruction of virgin forests, going into the forests, blocking trucks, climbing up trees and tying themselves to them.

âBut they received little media attention and lots of Canadians were not aware of the problem or didn’t care. âNow the Save Old Growth campaign is disrupting the public with fewer than 70 people.Â âThey have been on the national news, they have been taken to prison and they have shocked the nation.Â âAccording to polls, now more than 80% of Canadians are worried about the problem and want the government to stop the destruction of their forestsâ.

Another characteristic of these protestors is their fearlessness when it comes to putting their safety and freedom on the line.
Indeed, many have faced prison for the cause, including 51 JSO supporters jailed on September 15 after taking action at the Kingsbury Oil Terminal in Britain.

Whether the majority like these tactics or not, with more protests planned in the coming weeks and months, we are certain to hear more about these groups. âWhat’s the price of inaction?â said Costantino.

âIf we don’t cut emissions immediately, more than three billion people will be forced to leave their homes by 2070. âWe must open our eyes and understand that our parents, our children, our loved ones are going to die in huge numbers if we don’t act nowâ.