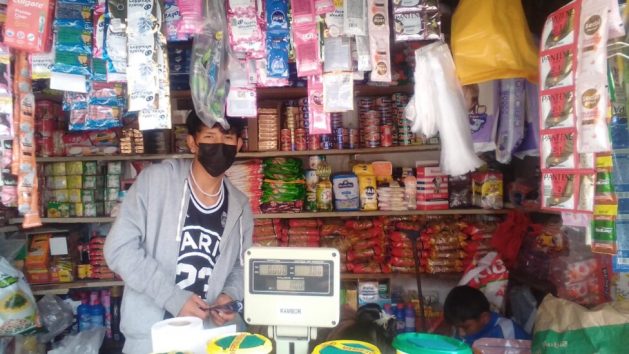 Rodrigo Reyes, 18, was forced to drop out of school in 2020, because his family could not afford to pay for the internet or electronic devices that would allow him to attend class online, just when he was about to finish high school and was thinking of studying mechanics, his dream. Since then he has been working as a vendor at his mother's stall in a market on the outskirts of the Peruvian capital. CREDIT: Mariela Jara/IPS

Rodrigo Reyes, 18, was forced to drop out of school in 2020, because his family could not afford to pay for the internet or electronic devices that would allow him to attend class online, just when he was about to finish high school and was thinking of studying mechanics, his dream. Since then he has been working as a vendor at his mother's stall in a market on the outskirts of the Peruvian capital. CREDIT: Mariela Jara/IPS

This figure includes primary and secondary school students who had enrolled for the school year but did not complete it.

"I have always believed that study is what pulls people out of ignorance, what sets us free, and that is what we wanted for our children when we came to Lima with my husband. That is why it hurts me very much that we have not been able to afford to support Rodrigoâs plans."-- Elsa GarcÃ­a

In March 2020, as a preventive measure against the spread of COVID-19, remote education was adopted in the country, which meant that access to the internet and electronic devices was essential. Online classes continued until 2022, when students returned to the classroom.

But during this period, inequalities in access to and quality of education have deepened, affecting students who live in poverty or who form part of rural and indigenous populations.

Peru is a multicultural and multiethnic country with just over 33 million inhabitants, where in 2021 poverty affected 25.9 percent of the population, 4.2 percentage points less than in 2020, but still 5.7 points above 2019, the year before the outbreak of the pandemic. Monetary poverty officially affected 39.7 percent of the rural population and 22 percent of the urban population, reflecting a huge social gap.

“We are talking about the primary and secondary students who are always the ones who do not manage to thrive in their learning, those who, quote unquote, fail the Student Census Evaluation tests, who live in provinces that occupy the last places in the rankings at the national level,” said Rossana Mendoza, a university professor of Intercultural Bilingual Education.

“They are the same young people who face a number of deficiencies and services, they are indigenous people speaking a language other than Spanish for whom the Aprendo en Casa (learning at home) program launched by the government was not an adequate response,” she added in an interview with IPS at her home in the Lima district of JesÃºs MarÃ­a.

But students in poor suburbs were also affected. Mendoza said they had to alternate their school work with helping their parents by working to support the family, thus spending very little time on their studies.

Rossana Mendoza, a university professor in the Intercultural Bilingual Education program, says at her home in Lima that “the priority is to recover this population excluded from the education system,â referring to children and adolescents who are marginalized from the classroom, a proportion that has grown since the start of the COVID pandemic. CREDIT: Mariela Jara/IPS

This was the case for Reyes, who had no choice but to drop out of school and put aside his dream of becoming a heavy machinery technician.

“I was going to finish school at 16, I was going to graduate with my friends and then I planned to prepare myself to apply to the institute and become a mechanic… but it didn’t happen,” he told IPS at his mother’s stand where they sell food and other products at the Santa Marta market in his neighborhood, where he has been working full-time since the pandemic began.

Reyes lives in the outlying area of the district of Ate, one of the 43 that make up Lima, located on the east side of the capital. Like a large part of the population of the district of almost 600,000 inhabitants, his family came from the interior of the country in search of better opportunities.

“I have always believed that study is what pulls people out of ignorance, what sets us free, and that is what we wanted for our children when we came to Lima with my husband. That is why it hurts me very much that we have not been able to afford to support Rodrigoâs plans,” the young man’s mother, Elsa GarcÃ­a, told IPS sadly.

The pandemic dealt a major blow to the family’s precarious budget, and Rodrigo and his two younger siblings dropped out of school in 2020. The following year, only the younger siblings were able to return to their studies.

“With my help at the shop we managed to save some money and my dad was able to buy a cell phone for my siblings to use and now they share internet. I have to continue supporting them so that they can finish school and become professionals, maybe later I can do it too,” Rodrigo said.

Barriers to education existed before the pandemic in this South American country. This is well known to Delia Paredes, who left school before completing her primary education because she became pregnant. Today she is 17 years old and has not been able to resume her studies.

She lives with her parents and younger sisters in the rural area outside of the town of Neshulla, which has a population of 7,500 and is located in the central-eastern part of Ucayali, a department in Peruâs Amazon jungle region. Her father, Ãber Paredes, is a farmer with no land of his own and works as a laborer on neighboring farms, earning a monthly income of less than 100 dollars.

“I haven’t been able to afford to buy my daughter the shoes and clothes and school supplies she needed to continue studying, and after having her baby she became a homemaker helping my wife… I have no money, there is a lot of poverty around here,â he told IPS by telephone from Neshulla.

His younger daughters Alexandra and Deliz are in school and returned to the classroom this year. Alexandra feels sorry for her older sister. “She always repeats that she wanted to be a nurse. I have told her that when I become a teacher and am working, I will help her,” she said.

Early pregnancy, such as Delia’s, considered forced by rights organizations because it is usually the result of rape, reached 2.9 percent among girls and adolescents between 12 and 17 years of age in 2021. Like poverty, it is concentrated in rural areas, where it stood at 4.8 percent, compared to 2.3 percent in urban areas.

Sitting in front of their home in Neshulla, in the Peruvian Amazon region of Ucayali, are farmer Ãber Paredes and two of his daughters. Delia, on the right, was forced to drop out of school after she became pregnant and her father could not afford to buy her supplies. Now 17, she has not forgotten her desire to become a nurse. Her sister Alexandra, on the left, has promised to support her in the future. CREDIT: Gladys Galarreta/ IPS

In 2020 almost a quarter of a million schoolchildren were forced to drop out of school at the national level, and in 2021 the number was almost 125,000. However, by 2022, the gap has widened, with nearly 670,000 not enrolled in the current school year, which began in March.

This gap has emerged despite the fact that the Ministry of Education launched a National Emergency Plan for the Peruvian Educational System from the second half of 2021 to the first half of 2022, aimed at creating the conditions needed to bring back children who dropped out of school.

Professor Mendoza said the priority is to bring back to school the segment of the population excluded from the right to education. “A strategy is needed that provides support not only in terms of studying, but with regard to the difficulties dropped-out students face in surviving with their families who due to the pandemic have lost their mother, father or grandparents,” she said.

“You have to see them in that context and not just because they are underachieving in learning. To see that they have a life with terrible disadvantages to get ahead and that they are being excluded from the education system,” she said.

She added that it is necessary to clearly identify the target population. “The Peruvian school management system, which is quite developed, should allow us to know who these children and adolescents are, what their names are, where they live, what has happened to their families and how the school system can provide them with opportunities within their current living conditions.â

Mendoza explained that not only are they outside the system, but their living conditions have changed and they cannot be expected to return to the school system as if nothing had happened after they fell into even deeper poverty or were orphaned.