This news brought to you by: INTER PRESS SERVICE
By Mariela Jara | 23.Nov.22 | Facebook Twitter
Pandemic Aggravated Violence against Women in Latin America 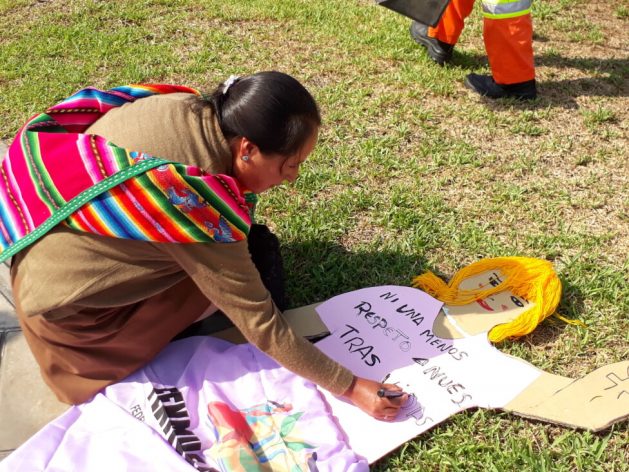 "Not one woman less, respect our livesâ writes a Peruvian woman on the effigy of a woman in a park in front of the courthouse, before a demonstration in Lima over the lack of enforcement of laws against femicides and other forms of violence against women. CREDIT: Mariela Jara/IPS

This article is part of IPS coverage of the International Day for the Elimination of Violence against Women on Nov. 25.

"Not one woman less, respect our livesâ writes a Peruvian woman on the effigy of a woman in a park in front of the courthouse, before a demonstration in Lima over the lack of enforcement of laws against femicides and other forms of violence against women. CREDIT: Mariela Jara/IPS

LIMA, Nov 24 2022 (IPS) - Violence against women has failed to decline in the Latin American region after the sharp rise recorded during the COVID-19 pandemic, while preventing the causes of such violence remains a major challenge.

This is what representatives of the United Nations, feminist organizations and women’s movements told IPS on the occasion of the commemoration of the International Day for the Elimination of Violence against Women on Nov. 25.

"We attack the problem but not its causes. I have been talking for 30 years about the importance of preventing violence against women by fostering major cultural changes so that girls and boys are raised in the knowledge that it is unacceptable in any form." -- Moni Pizani

This date, established in 1999 by the United Nations, was adopted in 1981 at the first Latin American and Caribbean feminist meeting held in Colombia to promote the struggle against violence against women in a region where it continues to be exacerbated by high levels of âmachismoâ or sexism.

The day was chosen to pay tribute to Patria, Minerva and Maria Teresa Mirabal, three sisters from the Dominican Republic who were political activists and were killed on Nov. 25, 1960 by the repressive forces of the regime of dictator Rafael Trujillo.

The date launches 16 days of activism against gender violence, culminating on Dec. 10, Human Rights Day, because male violence against women and girls is the most widespread violation of human rights worldwide.

“It is not possible to confirm a decrease in gender violence in the region at this post-pandemic moment,â said Venezuelan lawyer Moni Pizani, one of the region’s leading experts on women’s rights. âI could say, from the information I have gathered and empirically, that the level has remained steady after the significant increase registered in the last two years.”

Pizani, who retired from the United Nations, currently supports the UN Women office in Guatemala after a fruitful career advocating for women’s rights. She was twice representative in Ecuador for UN Women and its predecessor Unifem, then worked for East and Southeast Asia and later opened the UN Women Office for Latin America and the Caribbean in Panama City as regional director.

“Before the pandemic we used to talk about three out of 10 women having suffered violence, today we say four out of 10. The other alarming fact is that the impact is throughout the entire life cycle of women, including the elderly,” she told IPS in a conversation in Tegucigalpa, Honduras during a Central American colloquium on the situation of women.

UN Women last year measured the “shadow pandemic” in 13 countries in all regions, a term used to describe violence against women during lockdowns due to COVID.

Seven out of 10 women were found to have experienced violence at some time during the pandemic, one in four felt unsafe at home due to increased family conflict, and seven out of 10 perceived partner abuse to be more frequent.

The study also revealed that four out of 10 women feel less safe in public spaces.

Venezuelan lawyer Moni Pizani, one of Latin America’s leading experts on gender issues, with a long career at UN Women and its predecessor Unifem, takes part in a Central American colloquium in Tegucigalpa on sustainable recovery with gender equality in the wake of the COVID pandemic. CREDIT: Mariela Jara/IPS

According to the same study, unemployed women are the most vulnerable: 52 percent of them experienced violence during the pandemic.

And with regard to mothers: one out of every two women with children also experienced a violation of their rights.

The expert highlighted the effort made by many countries to adopt measures during the pandemic with the expansion of services, telephone hotlines, use of new means of reporting through mobile applications, among others. But she regretted that the efforts fell short.

This year, the region is home to 662 million inhabitants, or eight percent of the world’s population, slightly more than half of whom are girls and women.

The level of violence against women is so severe that the Economic Commission for Latin America and the Caribbean (ECLAC) cites it as one of the structural factors of gender inequality, together with gaps in employment, the concentration of care work and inequitable representation in public spaces.

Governments neither prevent nor address violence

Peru is an example of similar situations of gender violence in the region.

It was one of the countries with the strictest lockdowns, paralyzing government action against gender violence, which was gradually resumed in the second half of 2020 and which made it possible, for example, to receive complaints in the country’s provincial public prosecutors’ offices.

The Public Prosecutor’s Office Crime Observatory reported 1,081,851 complaints in 2021 – an average of 117 per hour. The frequency of complaints returned to pre-pandemic levels, which in 2020 stood at around 700,000, because women under lockdown found it harder to report cases due to the confinement and the fact that they were cooped up with the perpetrators.

Cynthia Silva, a Peruvian lawyer and director of the non-governmental feminist group Study for the Defense of Women’s Rights-Demus, told IPS that the government has failed to reactivate the different services and that the specialized national justice system needs to be fully implemented to protect victims and punish perpetrators.

Lawyer Cynthia Silva, director of the Peruvian feminist institution Demus, poses for a picture at the headquarters of the feminist organization in Lima. She stresses the need for government action against gender violence to include not only strategies for attending to the victims, but also for prevention in order to eradicate it. CREDIT: Mariela Jara/IPS

She stressed the importance of allocating resources both for addressing cases of violence and for prevention. “These are two strategies that should go hand in hand and we see that the State is not doing enough in relation to the latter,” she said.

Silva urged the government to take action in measures aimed at the populace to contribute to rethinking socio-cultural patterns and âmachistaâ habits that discriminate against women.

Based on an experience they are carrying out with girls and adolescents in the district of Carabayllo, in the extreme north of Lima, she said itâs a question of supporting âdeconstruction processesâ so that egalitarian relations between women and men are fostered from childhood.

On Nov. 26 they will march with various feminist movements and collectives against machista violence so that “the right to a life free of violence against women is guaranteed and so that not a single step backwards is taken with respect to the progress made, particularly in sexual and reproductive rights, which are threatened by conservative groups in Congress.”

Adolescent women and men in Lima, the Peruvian capital, wave a huge banner during the march for the International Day for the Elimination of Violence against Women on Nov. 25, 2019, before the outbreak of the COVID-19 pandemic that exacerbated such violence in Latin America. CREDIT: Mariela Jara/IPS

Argentina is another example of gender violence â including femicides – in Latin America, the region with the highest levels of aggression against women in the world, the result of extremely sexist societies.

This is in contrast to the fact that it is one of the regions with the best protection against such violence in national and even regional legislation, because since 1994 it has had the Inter-American Convention on the Prevention, Punishment and Eradication of Violence against Women.

The problem is that these laws are seriously flawed in their implementation, especially in the interior of the countries, agree UN Women, regional organizations and national womenâs rights groups.

Rosaura AndiÃ±ach, an Argentine university professor and head of community processes at the Ecumenical Regional Center for Counseling and Service (CREAS), said it is worrying that in her country there are still high rates of femicide, despite the progress made in terms of legislation.

Between January and October 2022, there were 212 femicides and 181 attempted gender-based homicides in the country of 46 million people, according to the civil society observatory âAhora que sÃ­ nos venâ (Now that they do see us).

She said the government still owes a debt to women in this post-pandemic context, as it fails to guarantee women’s rights by not adequately addressing their complaints.

“We do not want the same thing to happen as with a recent case: Noelia Sosa, 30 years old, lived in TucumÃ¡n and reported her partner in a police station for gender violence. They ignored her and she committed suicide that afternoon because she did not know what else to do. We are very concerned because the outlook is still as serious as ever in terms of violence against women,” AndiÃ±ach said.

It was precisely in Argentina that the #NiunaMenos (Not one woman less) campaign emerged in 2015, which spread throughout the region as a movement against femicides and the ineffectiveness of the authorities in the enforcement of laws to prevent and punish gender-related murders, because femicides are surrounded by a very high level of impunity in Latin America.

Moni Pizani, from UN Women, stressed that the prevention of gender violence should no longer fall short in the region.

“We attack the problem but not its causes. I have been talking for 30 years about the importance of preventing violence against women by fostering major cultural changes so that girls and boys are raised in the knowledge that it is unacceptable in any form,” she underlined.

This strategy, she remarked, “involves investing in youth and children to ensure that the new generations are free from violence, harassment and discrimination, with respect for a life of dignity for all.â